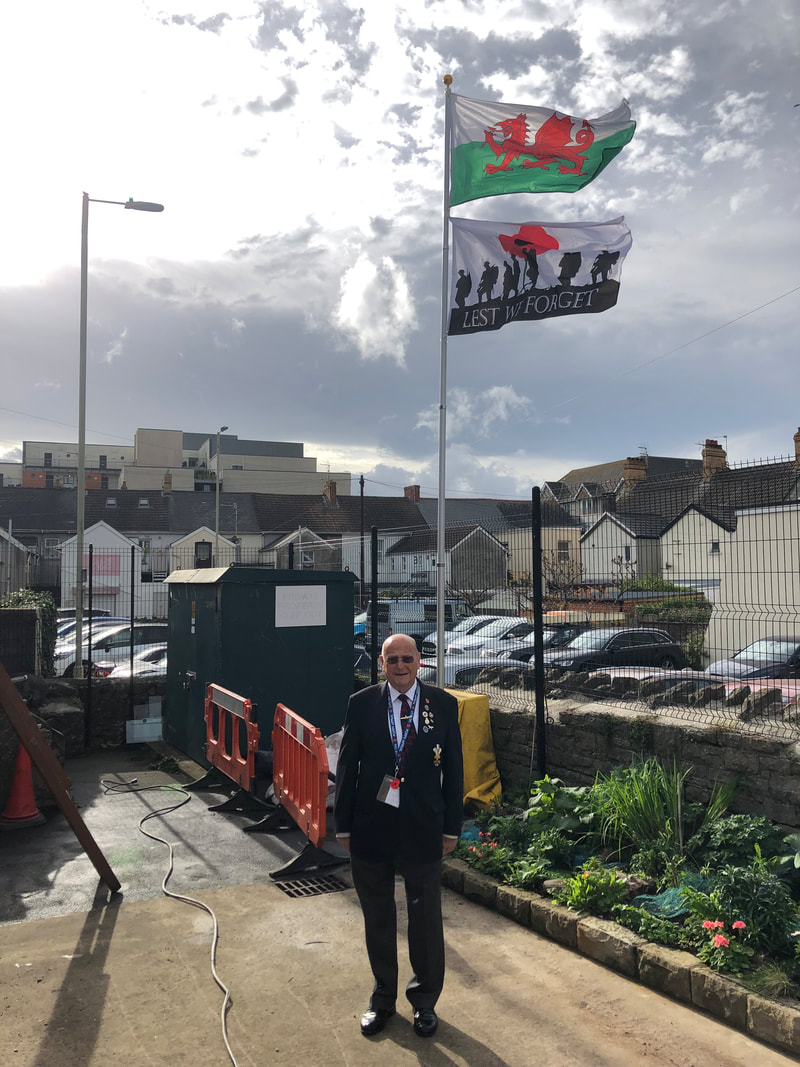 Meet our newest member!
​Proudly showing off his Museum sticker. 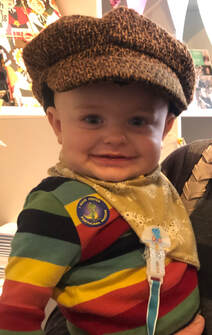 DINOSAUR DAY!
Smiles all round.
​See you all next year Thursday 17th August 2023. 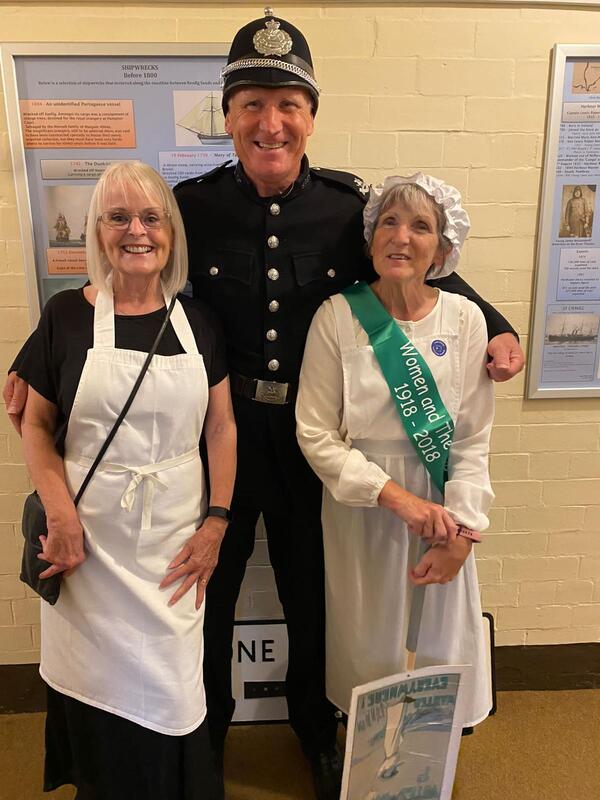 The WW2 display is returning following the closure of the successful Falklands War Exhibition. Volunteers are once again building, creating and presenting various items in their display areas, including the 49th Recconnaissance Regiment 'C' Squadron; unique to Porthcawl Museum.

The Ambassador of Poland Arkady Rzegocki and Consul General of the Republic of Poland in Manchester Michael Mazurek visited Wales on Monday to inaugurate a new Honorary Consulate of the Republic of Poland in Cardiff. In the morning they met with first Minister of Wales, Mark Drakeford and Lord Mayor of Cardiff Cllr Rod McKerlich; whereupon Professor Keshav Singhal was installed as the Frist Honorary Consul of Poland with jurisdiction for Wales.
Following the ceremony and the laying of a wreath at the Polish Memorial at the City Hall, the Polish dignitaries visited Porthcawl Museum. The reason for their visit was to enable the Polish Ambassador to lay a wreath at the base of the propellor that had been donated to Porthcawl Museum during lockdown.  It was from an Avro Anson that had collided with a Westland Lysander on 21 September 1943.  Tragically, seven airmen were killed.  The Pilot of the Avro Anson was Piotr Strysharek who is buried in Nottage Cemetery alongside Aircraftsman Penfold, who was a gunner under training on the Avro Anson.  The remaining 5 non-Polish airmen were buried in their own hometowns.
On arrival, at the museum, the party were met by the Lord Lieutenant of Mid Glamorgan, Professor Peter Vaughan; Bridgend CC Mayor Cllr John Spanswick; Head of BCBC Cllr Huw David; Cllr Richard Young, The Armed Forces Champion; Cllr Stuart Baldwin, (in charge of Highways); Cllr Tracey Hill, Mayor of PTC; Wing Commander Ben Trapnell, Station Commander MOD St Athan and CO No 4 School of Technical Training; Station Warrant Officer David Stroud of MOD St Athan.
Following an official welcome given by Paul, our chairman, Rob then accompanied the honoured guests to the RAF Room where they were introduced to photographs and stories of another 15 Polish Airmen that had served at Stormy Down.
Over the last few years, it has been Rob and Ann’s, dedication and research into RAF Stormy Down’s history that has initiated our prestigious RAF exhibition; upon which a dedicated team of volunteers now, also, work .
After visiting other Museum exhibition rooms and enjoying the refreshments, organized by Chris, the party left for Nottage Cemetery where the Polish Ambassador laid wreaths on the graves of five Polish airmen that are buried there.  They are Sgt Strycharek; Sqn Ldr Waclaw S Czaplicki; Sgt Witold Bluczynski; Pilot Officer Jozef Puklo; Sgt Karol Dindorf.
Porthcawl's 100 year old Coastguard Cart is coming Home!!
The MONIKA panel will be the centre-piece of a new Prisoner of War Room!
Plus new
Textile Exhibition and Victorian Tool Shed
and for the first time on view
The Blundell Archaeology Collection!!

Porthcawl Lions presented a cheque for £1000 to Porthcawl Museum. 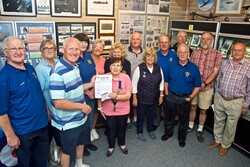 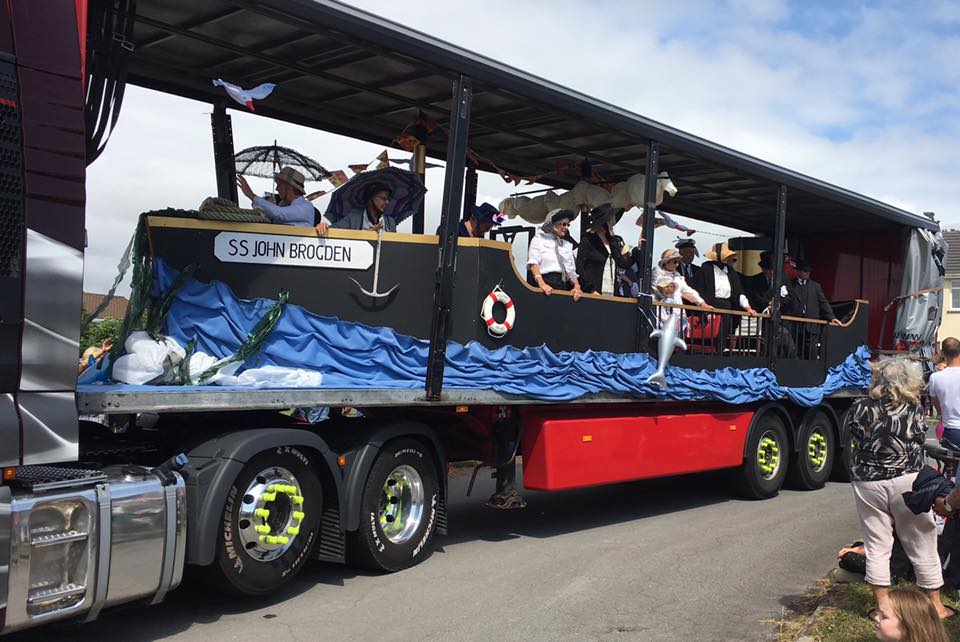 Success like this takes a lot of time and effort.

BIG BIG THANKS TO: -

THE PANELS HAVE ARRIVED

ISLAND FARM PANELS HAVE COME TO PORTHCAWL MUSEUM
Two  German Prisoner of War murals are to be re-housed in a newly prepared room in our backyard.
Quite some years ago, apart from the preservation of Hut 9, the Island Farm WW2 Prisoner of War camp was demolished. During that process two panels, from one of the huts were saved and removed to BCBC’s depot at Waterton. The panels, which carry drawings made by German prisoners, once again have to be relocated as the Waterton site is being dismantled. With preservation in mind and aware of our Accreditation status, BCBC asked if we would take them.
Thank you to Matt of Bryan Alexander for getting them to us.
We were thrilled to welcome
Morriston Comprehensive School 6th Form Geography Group
​on Friday 14th June. 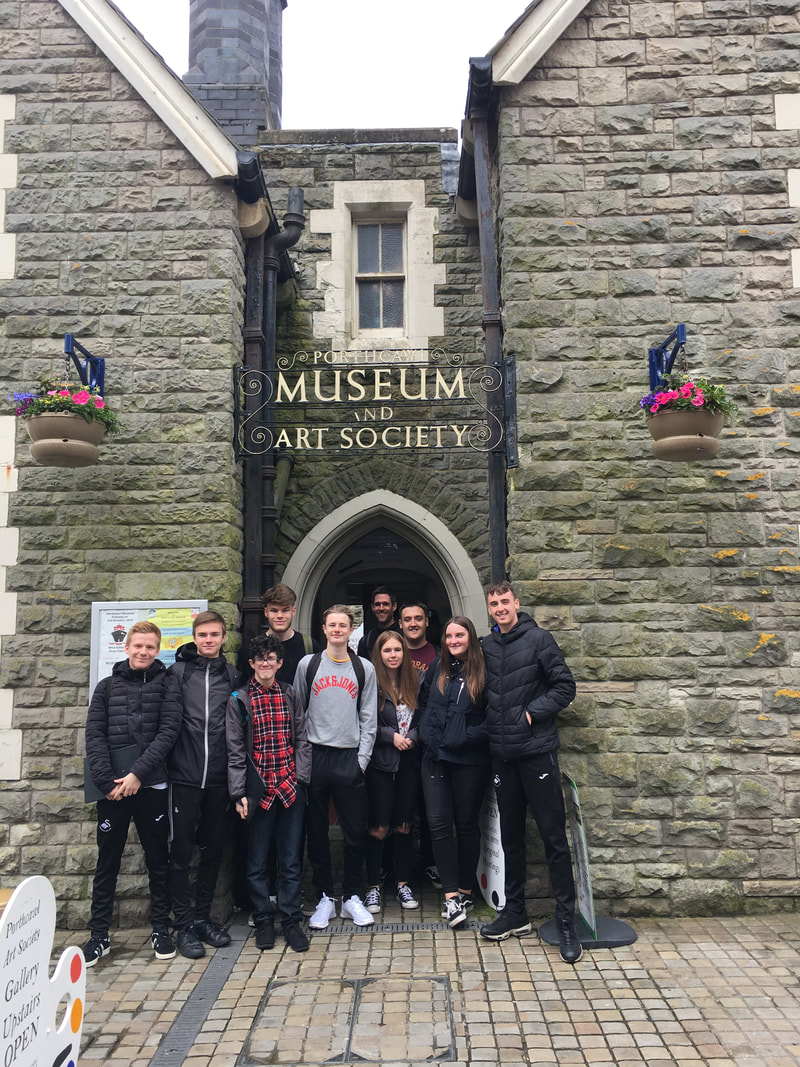